So we have experience the joy of the butterfly life-cycle.  Was a bit different to the one I had in NZ when I was a little girl.  There caterpillars actually ate leaves…and of course as we had a bush in our garden and there were loads and loads to watch.  This time I guess our experience was a little more “London”.  The caterpillars arrived in a jar of brown goo…which we weren’t allowed to open in case we contaminated them. 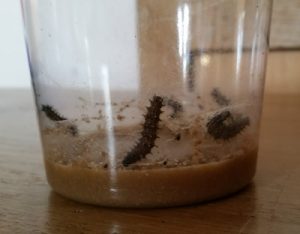 So we waited and watched as they grew at an alarming pace, spinning silk and pooping to their heart’s content.  Then after about 7 days they climbed to the top of the jar and attached themselves to the paper disc and turned into chrysalis’. 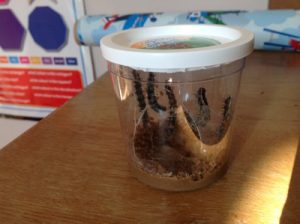 Bit bigger now…plus all their silk

Next instruction – move the paper disc into the hatching environment.  “Don’t be alarmed if they shake – it’s their way of warding off predators”. I was alarmed, very alarmed – it was like a magnitude 7 earthquake.  I thought one of them was going to shake itself loose.  It carried on for a good 20 mins and I thought it would be a goner.

But 7 days later and we have 5 healthy butterflies.  We missed all of them hatching, although Sam did come running in to announce that one had had a nose bleed.  This was in fact meconium that the butterfly uses to pump up it’s wings, and then expels any unused meconium once it’s wings are fully formed.

Cleo was more interested in them than the kids to be fair.  So they spent a couple of nights in our room out of harms (read Cleo’s) way.  Then we released them today.  It has been raining all week, so I’ve been waiting for a day that might not be so much of a shock to our friends who have enjoyed house temperatures of 19+ their whole short lives.

Definitely releasing them was one of the more fun parts of the life-cycle.  Enjoy the video below – Emma is great in it…